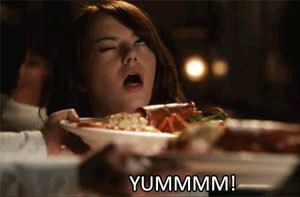 15 Types of People at a Super Bowl Party

So you’re going to a Super Bowl Party – or maybe you’re hosting it this year. Either way, you’re likely doing one or the other because, well, it’s Super Bowl Sunday! You know the people who will be there – friends, neighbors, family members. But what are they REALLY like when the big game begins. Read on for 15 different types of people you may find at a Super Bowl party.

1. The Clueless Spectator. Who’s playing? Who’s winning? Who are we rooting for? What sport is this?

2. The Mysterious Girlfriend. Does she know what’s going on? Does she care? She’s just there to be with her man.

3. The Scary Guest. He takes the game very seriously. Best to put this guy in an armchair, away from unsuspecting others.

4. The Betting Fan. He’s bet his paycheck on the team, and he’s not going to let anyone forget it.

5. The Foodie. We’re all there for the food, but this person just pulled her chair up to the buffet table. Hey, save some sliders for the rest of us!

6. The Big Yawn. He’s so bored. No one’s really sure why he bothered showing up.

7. The Lucky Fool. This person keeps winning squares without knowing a single thing about football. Grrrr.

8. The Ad Lover. SHHHHH. Everyone be totally silent or go outside when the game breaks for the Super Bowl commercials.

9. The Tweeter. This party goer spends the entire game on the phone live-tweeting to cyber friends. Why she chose your couch as her relay station is anyone’s guess.

10. The Oppposition. You’re not sure why he came because he’s the only one at the party rooting for the opposing team…loudly.

11. The Blabber Mouth. This is the guest everyone suddenly regrets inviting… while everyone is trying to watch the game, this person is taking up precious space in front of the TV to catch up on the latest gossip.

12. The Dieter. She’s trying to lose weight so is letting you know how many grams of fat are in every bite. Oh, the guilt in a handful of chips!

13. The Half-Timer. She’s going bonkers over the Halftime show. It’s all she want to talk about for the rest of the day.

14. The Trash Talker. Alright, alright, you really want your team to win... But enough with the trash talk already!

15. The Expert. Because NO ONE knows as much about football – or sports in general - than this know-it-all.

Be honest…which one are you?